28. It was here in Massachusetts that the process of Vulcanization was invented by Charles Goodyear in a factory in Woburn where he lived. He accidentally combined rubber and sulfur upon a hot stove. Much to Goodyear’s surprise, the rubber didn’t melt. And, when he raised the heat, it actually hardened.[20]

29. Boston, Massachusetts is the headquarter of the world’s leading brand of safety razors “Gillette.”[21]

30. TUPPERWARE™ was invented by Earl Tupper while he was experimenting with plastic. He molded the then-new material into containers and started marketing his products as giveaways with cigarettes.[22]

31. The inventor of the World Wide Web, Sir Timothy John Berners-Lee, is currently a professor at the Massachusetts Institute of Technology (MIT).[23]

32. The Charles Williams, Jr. House located on Arlington Street, Somerville, is the location of the first residential telephone line in the world. The phone inside the house connected to the owner’s office 3 miles away at 109 Court Street in Boston. These two properties had the first telephone numbers – 1 & 2 of the Bell Telephone Company.

33. Massachusetts revolutionized the frozen fruit industry. Clarence Birdseye, developed the first freezer to quick-freeze fish and other foods including meat, vegetables etc. Foods that were frozen quickly as opposed to slow freezing tasted better. Birdseye was issued US Patent #1,773, 079 that marked the beginning of the frozen food industry. A range of frozen foods were test marketed in Springfield, Massachusetts; and after a great response from the public, the company continued to sell their frozen food products and the rest is history.

34. Boston, the state’s most populous city, has been the capital of Massachusetts since its founding.

35. Did you know that the first thanksgiving was held in Massachusetts in the Plymouth Colony in 1621?

36. Massachusetts is one of the nation’s leading producer of cranberries.

37. To protest the British tea tax, many Bostonians dumped tea from three British ships into the sea. The event happened on Boston harbor and was since then widely known as the Boston Tea Party.

39. Massachusetts is the birth of American Revolution where the first resistance against the British colonial rule emerged.

40. The state also gave birth to the birth control pills. Dr. Gregory Pincus developed the pills in the 1959s in the Clark University in Worcester.

42. Springfield lies at a distance of 24 miles from Hartford, the capital of Connecticut. The Springfield-Hartford region is known as the “Knowledge Corridor” because of the facts that the region has more than 32 universities and shelters more than 150,000 students. This is the second-largest concentration of higher learning institutions in the United States.

About the flag of Massachusetts 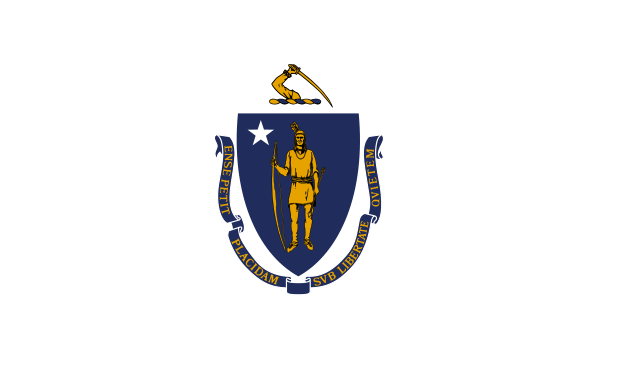 The flag of Massachusetts establishes the state’s values: a yearning for peace and a readiness to fight for freedom.

It shows the state coat of arms at the center of a white field. It has a blue shield depicting a Native American standing at rest with a bow planted on the ground. His arrow is pointing downward to imply tranquility.

At the upper left of the shield, you will see a white star near the head of the warrior. It represents Massachusetts as a state in the Union – as in one of the stars in the US flag.

Above the shield is a military crest displaying a bent arm with a broadsword. The blade points up, ready for battle, as a reminder that it took a revolution to win freedom. The crest represents the state philosophy: it is better to lose an arm than to live under tyranny.

A blue ribbon flows around the shield while showcasing the state motto: “Ense Petit Placidam, Sub Libertate Quietem.” This Latin phrase means “By the sword, we seek peace, but only peace under liberty.”

Massachusetts officially adopted the current flag in 1971. However, efforts are underway to replace it along with the seal and motto due to racial controversies. A special commission is due to complete its work in March 2023.

The flag follows a proportion of 3:5. Folds in the ribbon serve as spaces for the words in the motto. It should be easy to read from the left and the right.

In 1629, the first seal of the Massachusetts Bay Colony depicted an American Indian and a scroll with the words “Come over and help us.” It highlights the missionary intentions of the colonists.

In 1676, changed the words to reflect the war between the natives and the colonists. The conflict reduced enthusiasm for indigenous conversion and integration.

In 1775, they created a revolutionary seal with a minuteman holding a sword and the Magna Carta. The Latin motto also made its first appearance.

In 1780, the revolution was over. Massachusetts created a peacetime seal with an Indian holding a bow and arrow at rest. It also had a silver star and a blue ribbon with the state motto.

In 1907, Massachusetts adopted a state flag with a pine tree in the middle. This widely used revolutionary flag is a symbol of peace in New England. It depicts the tree under which native tribes buried their weapons after decades of war.

In 1971, the current design with the coat of arms replaced the pine tree flag, which now serves as the official Massachusetts naval flag.

Massachusetts is among three states that feature a Native American in its state flag. The other two are Florida and Minnesota.

The Flag of the Governor of Massachusetts is similar to the state flag except for the shape. It is a triangular banner with a white field and a coat of arms near the hoist.

The first flag flown in Massachusetts as a colony had a red field with a white square at the upper left containing a red cross. Residents used it from 1620 to 1708, after which the Union Flag of Great Britain appeared on the corner.