Colombia, officially the Republic of Colombia, is the 29th most populous country in the world. It is a sovereign state largely situated in the northwest of South America, with territories in Central America. It has an area of 1,138,910 sq km. Its capital and largest city is Bogotá, D.C. Spanish is the official language of Colombia. Peso (COP) is the currency of Colombia. People living in Colombia are called Colombian. It has five bordering countries that include Brazil, Ecuador, Panama, Peru, and Venezuela.

Colombia, which is located at the northern tip of South America, is a country of lush rainforests, towering mountains and coffee plantations. There is so much to this country. Let’s explore it!

1. The theme of most children’s games, El Dorado, is actually a mythical city in ancient Colombia. Legend has it that a king used to spray himself with gold powder and then jump off from a golden boat into a lake in order to appease an undersea god.

2. Colombia loves anything and everything that has something to do with Futbol (soccer). Without Futbol, its iconic yellow jerseys, its heartthrob, James Rodriguez, or without its unique goal dance, Colombian people couldn’t get a peaceful night’s sleep.

3. The caffeine-drenched country loves to dance. The golden rule of Colombia: If you hear music, start moving.

4. The music is also thumping and pumping in Colombia. World-famous pop singer Shakira hails from good old Colombia. At the age of 4, she had her first poem which later became a song. She danced her way into the world of fame and has won many awards and recognized globally as a successful artist.

5. Colombia is named after the legendary Italian explorer, navigator, and colonizer – Christopher Columbus.

7. Starbucks opened its 1000th store in Latin America, and the first in the city of Medellín, Colombia. However, the company’s first store was inaugurated in Colombia in the capital city of Bogotá in 2014.

9. It is mandatory for radio and public television in Colombia to play the national anthem every day at 6 am and 6 pm.

11. Cano Cristales – the “River of Five Colors” or the “Liquid Rainbow”, is a river in Colombia located in the Serrania de la Macarena province of Meta. This river’s bed changes color between yellow, green, blue, black, and especially red, beginning the end of July and through November.

14. Archeologists estimate that humans settled in Colombia some 20,000 years ago.

15. Age is an important factor in Colombia. The older you grow, the more powerful your voice becomes. Elders are deeply respected and revered in this tropical nation.

16. Not lazy, but fun loving: Colombia, with 18 national holidays, came second in the “countries with the most national holidays” list. In case you are wondering who could top that, it’s India (21).

17. Bogota, the capital of Colombia, is a mecca for street artists. The government not only tolerates graffiti but also encourages and sponsors street art.

19. Colombia is a place of fun, frolic, and festivity. It loves its holidays, organizing salsa parades, flower parades, carnivals and more.

20. One out of every five butterfly species is found in Colombia.

21. The most popular choice for breakfast in Colombia is Changua. It’s simply a milk soup with an undercooked egg (Yes, it’s milk soup; you read it right.)

22. Drinking coffee in Colombia is a cheesy affair. Here, for an unknown, weird reason, people put blocks of salty cheese into their coffee when they are finished drinking it, and eat the mushy blobs of coffee soaked cheese.

23. Coffee is gulped down like water. While Colombian kids are given a nice coffee milkshake, they grow up to go pure black.

24. Oatmeal is not a breakfast cereal, but a juicing material. Yes, Colombians love to drink down the Avena, which is literally oatmeal juice.

25. Colombian women are very edgy about their curves.

26. Here’s something about drugs: 15 tons of raw pure cocaine — that’s how much white powder just one man shipped into the U.S. alone each day, at one point in time.

27. The King of Coke, Pablo Escobar, was born and bred in Colombia. During his heyday, he collected revenue to the tune of $420 million, weekly. That’s more than the monthly salary of all the CEO’s of all the top Fortune 500 companies put together.

29. With so many happy-go-lucky chemicals flowing around, Colombia is reported to be the happiest place on planet earth. Maybe it’s time to revamp the World Drug Policy.

30. A Nobel Laureate and a best friend of revolutionist Fidel Castro, Gabriel Garcia Marquez, was from Colombia. He is the author of “Love in the Time of Cholera,” which is the most-sold Spanish novel in history. Seems like Colombia colonized Spain, and not the other way around.

32. The government of Colombia found a $2 billion Spanish shipwreck under the sea near its coast. Spain, which looted them in the first place, has demanded the money back in an international dispute. Good logic: once you do steal it, it is yours.

33. Colombia’s Sierra Nevada de Santa Marta, at 13,000 m, is the world’s highest coastal mountain range. Incidentally, it’s on the run, and has moved more than a thousand miles in the last 170 million years.

34. Initially, people who went to find the treasures of El Dorado never returned. Maybe they were all broke. Moral of the story: Always book your return flight…eh..ship.

35. But then luck struck Spain, and Spain struck a mountain. Spain discovered a mountain, Cerro Rico, filled with silver….precious silver. Using free local labor plus hardworking llamas, they mined down the mountain, rock by rock.

36. All the hard work did work out, and Spain finally mined out silver, lots and lots of silver. The funny irony is; they dug so much silver that for their generation, silver became worth nothing….literally.

37. Colombia is drenched in Spanish influence. Though a former colony of Spain, Colombian culture, architecture, food habits, language, and its constitution are all more or less influenced by Spain.

38. Colombia is the world’s leading producer of Emeralds. The finest quality emerald, a green gemstone, is found only in Colombia. The country has more than 150 mines churning out high-quality emeralds.

39. Colombia is not only baked by the tropical sun from above but also fried from down below. It lies above the Pacific Ring of Fire, a region where volcanoes and earthquakes are as natural as birds and bees. The ring is 40,000km long, and there are more than 450 volcanoes.

40. Tejo is the native and national sport of Colombia. Beer is so common in this game, it’s almost a rule. The game consists of trying to throw a metal disk at a sack filled with gunpowder while being dead drunk.

41. It’s ColOmbia, and not ColUmbia. Mind your pronunciation because Colombians have a very fine ear for details.

42. Everyone and everything is sweet in Colombia, including its local alcohol, Aguardiente. It is made from sugarcane and is the best drink to enjoy the Colombian sun.

43. In fact, Colombia is so passionate about its sugar that it went to war with Peru over it. The eight-month war, known as the Leticia War, started due to a dispute in the sugar trade.

44. Colombia is even home to many pre-Columbian archaeological sites dating back to before there were European settlements.

45. When the Spanish came to conquer South America, their foreign European diseases killed most native people, even before any war. 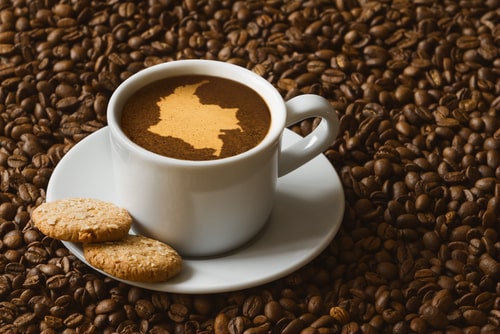 46. The economy of Colombia is mainly dependent on manufacturing and agricultural exports such as bananas, cut flowers, sugar, and coffee. Manufacturing exports include textiles, chemicals, garments, and metal products.

47. Colombia is the third largest exporter of coffee in the world after Brazil and Vietnam.

48. Colombia has been a contributor of very important advances in medicine, biology, geology, physics, mathematics, anthropology, and psychology.

49. The National Police is a branch of the armed forces and was formed in 1891 in order to enforce the federal laws of Columbia.

50. There are two major organizations in Colombia these days. They are guerrilla organizations known as the Revolutionary Armed Forces of Columbia and the Army of National Liberation.

51. The social security system was developed in 1843 and only applied to military personnel.

52. Colombia practices a free-market economy that has greatly benefited the country due to foreign investment and foreign trade.

53. The official language of Colombia is Spanish. All Colombians speak Spanish except for certain populations that live in the Amazonian basin. That’s a higher percentage than Spain itself.

54. A Venezuelan by the name of Francisco Miranda designed the national flag in 1806.

55. The red and yellow colors of the Colombian flag were adapted from the Spanish flag and the stripe of blue symbolizes the ocean that separates the country of Colombia from Spain. The condor signifies liberty as well as sovereignty, the yellow symbolizes the natural riches of the country while the red symbolizes the bloodshed in the war for independence.