Alabama is the 24th most populous and the 30th most extensive of the 50 states of the United States. It lies in the southeastern region of the United States. The state attained statehood on December 14, 1819, becoming the 22nd state to join the union. It shares its border with four states (Georgia, Tennessee, Florida, and Mississippi.) See the full list of the 50 states and their borders here. Alabama (nicknames: the “Yellowhammer State”, the “Cotton State”, the “Heart of Dixie”) has 67 counties. The state’s capital is Montgomery. The postal abbreviation for Alabama is AL. With these Alabama facts, let us learn more about its history, geography, people, economy and more.

1. The state was named after the Alabama River. The origin of the word Alabama is considered to be from two words “Alba and Amo”. Alba refers to vegetables, herbs; and plants while Amo refers to gatherer or picker. The combination of these words “vegetation pickers” describes the Alabama Indians who were the early settlers in the region.[1]

3. Did you know that the Spanish were the first Europeans to reach Alabama? This happened in 1540. But it was the French who settled first.

4. On January 11, 1961, Alabama seceded from the Union. The delegates from six states met at Montgomery and formed the Confederate States of America. Montgomery was chosen as the capital. Because of this, Montgomery is known as the “Cradle of the Confederacy.” The Confederate flag was designed and first flown in AL in 1861.[6,7,15]

5. Did you know that Helen Keller, born on June 27, 1880, in Tuscumbia, Alabama, was the first deaf and blind person to earn a college degree? Directed by Arthur Penn, a film “The Miracle Worker” was also produced in 1962 depicting the story of the remarkable tutor Anne Sullivan and Helen Keller.[32]

7. On 15 April 1886, Montgomery, Ala. became the first U.S. city to initiate an electric streetcar system for transportation, The Capital City Street Railway, also known as the Lightning Route. The system was however retired exactly after 50 years on April 15, 1936, and was replaced by buses.[5]

8. Did you know that Saturn V, the rocket used by NASA to send people to the moon, was developed at NASA’s Marshall Space Flight Center in Huntsville, Alabama? The first Saturn V was launched in 1967. The rocket was about the height of a 36 story-tall building and weighed about the weight of about 400 elephants.[3] 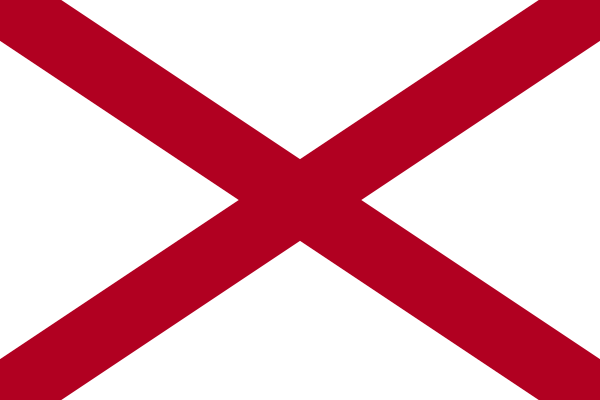 9. Interestingly, due to the presence of a rocket building facility in Huntsville, it (Huntsville) earned the name “Rocket City U.S.A.”[4]

10. Mary Anderson, born in Greene County, Alabama, is credited with the invention of windshield wipers. She was granted the patent for her invention in 1903. In 1922, Cadillac became the first car manufacturer to adopt them as standard equipment.[27]

12. Did you know that Mobile, Alabama is the birthplace of America’s original Mardi Gras? The parade originated in 1703 in port city.[10]

13. The Vulcan statue, the city symbol of Birmingham, Alabama, is the largest cast iron statue in the world. The 56-foot tall statue (from toe to spear point) depicting the Roman god Vulcan is the world’s largest iron-ore statue. It weighs 101,200 pounds. The statue was designed by the Italian artist Giuseppe Moretti.[11]

14. The Civil Rights Memorial in Montgomery, Alabama, honors those killed in the struggle for racial equality. The memorial also has a timeline of key events and the names of the 40 victims etched in black granite. The memorial was designed by Vietnam Veterans Memorial designer Maya Lin. It is located on an open plaza accessible to visitors 24 hours a day, every day of the week.[12]

15. Condoleezza Rice, the first African-American women to serve as U.S. secretary of state was born in Birmingham. Note that Birmingham is also the state’s largest city.[14]

16. The nickname the “Yellowhammer State” originates from the fact that the Confederate troops placed yellow trimmings on their uniform during the Civil War. Yellowhammers are the birds with yellow patches under their wings.[15]

17. Did you know that Martin Luther King, Jr. began his career as a local pastor at Dexter Avenue Baptist Church in Montgomery?[17]

18. The Selma-to-Montgomery march in 1965 guaranteed the right to vote to all African Americans. Dr. Martin Luther King Jr. participated in the march. He had recently won the Nobel Peace Prize in 1964, which helped him draw attention to the difficulties faced by black voters, and the need for a national Voting Rights Act.[34]

20. Did you know that on the night of November 12, 1833, a spectacular occurrence of the Leonid meteor shower had been observed in Alabama? The shower was so intense that many people thought that the world is coming to an end. The “night the stars fell” is mentioned in several stories about Ray County.[24]

21. Did you know that Marie Bader, a 26-year-old from Mobile, Alabama, holds the world record for the fastest 10-kilometer run on sand? She completed the remarkable run in 55 minutes and 1 second.[16]

22. In 1910, Wright brothers opened the first-ever in the U.S. civil aviation school on an old cotton plantation on the outskirts of Montgomery, Montgomery County. However, the flight school did not remain operational for a long time due to some problems.[28]

23. Carl Lewis, the famous track-and-field athlete, who won nine Olympic gold medals during the 1980s and ’90s, was born in Birmingham, Alabama. He also won one Olympic silver medal, and 10 World Championships medals, including eight gold.[18]

24. During the first half of the 19th century, cotton and slave labor played a central role in the state’s economy.

25. According to PEW research, Alabama is the most religious states in the US, followed by Mississippi (2nd), Tenessee (3rd), Louisiana (4th), and Arkansas (5th).[19]

27. Talladega Superspeedway, formerly named Alabama International Motor Speedway (AIMS), is a motorsports complex located north of Talladega, Alabama. It is the longest NASCAR oval with a length of 2.66 mile (4.281 km).[21]

29. Jesse Owens is an Olympic gold medalist who was born in Oakville, Alabama. He was the son of a sharecropper and grandson of a slave. He won four gold medals at the 1936 Olympic Games in Berlin.[30]

31. In terms of alcohol consumption, Alabama is one of the driest states in the U.S.[25]

32. The last constitution adopted by Alabama in 1901, is the longest of all the state constitutions. the document has more than 376,000 words. Vermont has the shortest constitution (8,565 words) among the 50 states.[26]

33. Alabama is the second leading catfish producing state in the U.S., surpassed only by Mississippi.[29]

34. The spiral staircase in the Alabama State Capitol was built by Horace King, who was an architect, engineer and bridge builder. He was born in slavery in South Carolina in 1807. [33]

35. Did you know that Mercedes Benz established its first U.S. factory in Vance, Tuscaloosa, Alabama? It was also the first-ever automobile factory in the state. The plant started producing cars in January 1997.[31]

36. Alabama’s Central Estuary: Mobile Bay serves as a historical area where fresh water from rivers mixes with marine waters that are brought by tides. Fresh water from the streams flows directly into the ocean hence mixing with salty water. There are incredible sights for history buffs, fishers, and strollers such as pelicans and freighters floating on waters.

37. Home of Martyrs: the Montgomery Civil Rights Landmarks make a memorial center for leaders who died during the 1954-68 civil rights war. There is a Wall of Tolerance whereby guests pledge to fight against hate and uphold tolerance.

38. The Biggest Fishing Pier in Gulf Coast: Gulf State Park offers a scenic spot for tourists who love fishing and eating fish. Stop by and rent or buy fishing equipment, baits, and licenses. The pier provides amazing experiences for any level catering to beginners and seasoned anglers. Depending on the season, you can catch various species including Spanish mackerel, king mackerel, sheepshead, flounder, cobia, red drum, etc.

39. The W.C. Handy Home and Museum: W.C Handy was born in 1873 in Florence in this cabin that houses today a massive collection of artifacts, memorials, and papers. Hailed as the father of blues, William Christopher Handy composed such lovely songs as “Beale Street Blues” and “St. Louis Blues.” A complete collection of his work including music, trumpet, and artifacts, is stored at the W.C. Handy Birthplace, Museum, and Library.

40. Peanut Capital of the World: the biggest peanut festival in the United States takes place in Dothan, Ala. every fall. The city is actually hailed as the World’s Peanut Capital. The event pays homage to the agricultural heritage of Wiregrass area using whimsical sculptures around the town. People in this area demonstrate their love for peanut through a nutty artistic project that revolves around little goobers. The project comprises over 70 statues, peanut-themed and crafted by local artists. There is a popular statue names ‘The Peanut Man’ that pays tribute to Byron, a peanut peddler who used to sell boiled peanuts on the Main Street from a stand.

41. Unclaimed Baggage Center, Scottsboro: this is where the lost checked bags can be found. These include misplaced and mishandled cargos. The airlines have tremendously improved their services when it comes to the loss of luggage and handling of checked bags including electronic devices, clothes, and diamond rings. The misplaced items are returned to their owners within 2 days. Only a very small percentage remains unclaimed.

42. Largest Collection Of African-American Art: the University of Alabama received art worth 4.8 million dollars from Paul R. Jones as donations in 2008. The collection included over 1,700 pieces among them being the most sought-after African-American artworks. Jones brought the art after noticing the absence of fine art by African-American artists in the galleries, museums, and auctions.