Arizona is the 14th most populous and the 6th most extensive of the 50 states of the U.S. It is landlocked and lies in the southwestern region of the United States. The state attained statehood on February 14, 1912, becoming the 48th state to join the union. Its five bordering states are Nevada, New Mexico, Utah, California, Colorado. See the full list of the 50 states and their borders here. Arizona (nicknamed: the Copper State) has 15 counties. The state’s capital is Phoenix. The postal abbreviation for Arizona is AZ. Let us learn more about its history, geography, people, economy and more.

1. Arizona is one of the four corner states. Other three being New Mexico, Colorado, and Utah. It means that you can be in all four states at the same time when you are at the four corners (where the boundaries of four states meet, the point is marked by the Four Corners Monument).[1,20]

2. Arizona joined the union as the 48th state and hence it is the last of the contiguous states to do so.[1]

Flag of Arizona (Click to read 5 facts about the flag) 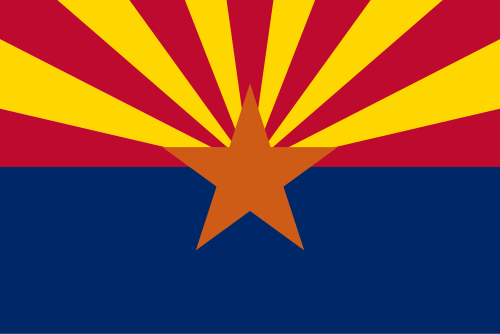 4. Arizona, Utah, Nevada, New Mexico and California were a part of Mexico in some point in history. Arizona became a part of the U.S. after the country won the American-Mexican war in 1848.[2]

5. Did you know that NASA astronauts are trained in “Meteor Crater” which is a 50,000-year-old crater to prepare for missions on the moon? The crater is nearly 3/4 of a mile across! Astronauts trained for Apollo missions on this crater. It was created 50,000 years ago by a nickel-iron meteorite.[22]

Arizona on the map

9. Arizona is the largest copper producing state in the Union. This fact is also made evident with the usage of a copper star on the flag of the state. Representing the thirteen original colonies, the flag consists of 13 alternating red and yellow rays.[5]

10. One of the most primitive rattlesnakes found in the country – the Arizona ridge-nosed rattlesnake – is the official state reptile of Arizona. The state has 13 species of rattlesnakes (sometimes called “buzzworms” because of the buzzing sound of their rattles), which is more than any other state.[5,18]

11. Phoenix, the capital of Arizona, is the most populous state capital in the United States. It is also the only state capital with a population of more than a million. The city was founded in 1867 by Jack Swilling.[6]

12. Visit Phoenix in summer and you’ll know why the NBA team Phoenix Suns was aptly named, as Phoenix, is popularly known as the valley of the sun, for obvious reasons. Located in a desert, this is something of a miracle city as you’d least expect it to be the fifth most populous city in the United States. With the famous Colorado River running through it, Mexico a stone throw away, and the first McDonald’s franchise being sold to a local Neil Fox, Phoenix is quite a unique city.

13. Did you know that the blind adventurers Lonnie Bedwell and Erik Weihenmayer completed a 21-day 277-mile kayak trip through the Grand Canyon on September 28, 2014? A tremendous amount of practice was done by the duo to accomplish the nearly impossible task.[23]

14. The other popular nickname of the state: The Grand Canyon State.

18. In terms of population, Mesa has by far the largest suburban population in the United States, outnumbering well-known cities like Miami and Minneapolis. Renowned for having hot summers and mild winters, it is a prime tourist destination for people from colder regions of the country. Mesa is home to Buck Owens (inductee to the Country Music Hall Of Fame), Misty Hayman (Olympic gold medallist and hitherto world record holder) and Tyson Apostol (winner of the 2009 edition of reality TV show Survivor).

19. Arizona is also home to the best-preserved crater on Earth – the Barringer Crater. It has a diameter of about 1,200 meters and a depth of 170 meters. It is estimated that the crater is 50 thousand years old.[9]

20. The “Cotton State” also has the largest aperture solar telescope located at the Kitt Peak National Observatory. Kitt Peak is an assembly of astronomical instruments located on top of the Quinlan Mountains in the Sonora desert. It is the largest astronomical observatory in North America. National Science Foundation (NSF) leased the land on which the observatory sits from the Tohono O’odham tribe in 1958. In 2005, the tribe opposed the installation of gamma ray detectors, arguing that they would disturb the spirits of their ancestors.[10,31]

22. Located at the bottom of the Grand Canyon, is the village of Supai, the only place in the country where mail is delivered by mule. The U.S. Department of Agriculture referred it to as “the most remote community” in the contiguous U.S. As of 2010, there were 208 people living in the village.[11]

23. Arizona (except the Navajo Nation) and Hawaii do not observe Daylight Saving Time.[12]

25. The state is home to the two largest man-made lakes in the United States – Lake Mead (largest) and Lake Powell (second largest).[14]

26. Pluto was discovered by Clyde Tombaugh at Lowell Observatory at Flagstaff on February 18, 1930.[15]

27. The amount of copper in the state Capitol Building Arizona is equivalent to 4.8 million pennies.[16]

28. The state, among all other states, has the highest percentage of land set aside and designated as Indian land.[1]

29. Cutting down a cactus in Arizona is a punishable offense and the maximum term in jail for the act could be 25 years. The saguaro cactus which is prevalent in Arizona takes a long time to grow. The lifespan of the plant is between 150 and 200 years and the plant can grow up to 50 feet tall. Thus, the authorities are aggressive about protecting the habitat.[17]

32. Because of the ability to view stars away from city lights and pollution, Tucson, Arizona is called the Astronomy Capital of the World.[25]

33. The Gila monster lives In Arizona desert. Gila monsters are the largest lizards native to the United States. They get their name from Arizona’s Gila River basin, where they were first discovered. A drug for the management of Type 2 diabetes is based on a protein from Gila monster saliva. The drug has the nickname “lizard spit,” according to the San Diego Zoo. [26,27]

34. Arizona is the first of the three states with official state neckwear: the bola tie. The other two states that have the same official neckwear are New Mexico and Texas.[28]

35. With an area of around 260,000 square kilometers, the Sonoran desert covers most southern Arizona and extends to California and Sonora State in Mexico. The Sonora is not only one of the hottest deserts in North America but also has the most bio-diversity due to the bimodal rain patterns affecting winter and spring months. Sonora hosts both Santa Catalina and Kofa Mountains, but only Catalina has snow. Sonora has high precipitation for a desert averaging at 10 inches of rainfall annually. Desert is any region on Earth that has a moisture deficit over the course of a year, meaning they can have less rainfall in a year than they give up through evaporation. Deserts actually make up 33%, or 1/3rd of the Earth’s total landmass.[28,29]

36. The Sonora is unique in that it is the only place where the majestic and impressive saguaro cactus grows. The saguaro blossom is the official flower of Arizona and blooms in the summer months of May and June.[30]

37. The Mojave Desert or the High Desert occupies the northwestern part of Arizona. It is named after the Mohave tribe and is the driest desert in the northern hemisphere with average annual precipitation ranging between 3.5 inches at lower elevations to nearly 10 inches in the mountains. The vegetation mainly comprises short shrubs though a variety of seasonal plants blossom during the rainy winter months. The most conspicuous tree species is the iconic Joshua tree that forms extensive forests at high elevation.