Nevada is the 32nd most populous and the 7th most extensive of the 50 states of the United States. It lies in the western region of the United States. The state attained statehood on October 31, 1864, becoming the 36th state to join the union. Nevada shares its border with Idaho, Oregon, Utah, Arizona, California. See the full list of the 50 states and their borders here. Nevada (nicknamed: the “Silver State”, the “Battle Born State” and the “Sagebrush State”) has 16 counties. The state’s capital is Carson City. The postal abbreviation for Nevada is NV. With these facts about Nevada, let us learn more about its history, geography, people, economy and more.

1. A drilling accident in 1916 unintentionally burst open a below-ground geothermal vein. The result is a 5-foot by 25-foot (at the base) spout known as Fly Geyser. It’s on private land about 20 miles north of the town of Gerlach.[1]

2. Brad Snyder, a Reno-born swimmer on the United States Paralympic team, has a watch named after him – “The Bradley Timepiece.” The watch was built for use by blind people.[37]

3. On November 4, 2017, an automobile sped along at 277.9 MPH on Nevada State Route 160 and didn’t even get a ticket! It was part of a world-record attempt by Koenigsegg Automotive AB to set the top speed for a production car. On that day, the Koenigsegg Agera RS made the grade and became the new world-record holder.[31]

5. The name of the state, Nevada, is an old Spanish word meaning “snow-covered.” That appellation refers to the white-topped Sierra Nevada Mountains, which inspired early settlers to name the place after one of the area’s most beautiful sights.[5]

6. “Way out in the land of the setting sun,” is the first line of a song written by Bertha Rafetto in 1932. In 1933, the Nevada State Legislature adopted Bertha’s song, entitled “Home Means Nevada” as the official state song.[27] 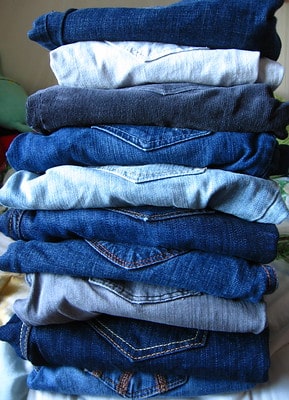 7. Jacob Davis is known all over the world for one of his inventions, though his name is known only to a few people. Mr. Davis was a tailor who created the first pair of blue jeans in his small shop in Reno, Nevada. Levi Strauss is credited as co-inventor, and the year was 1873. The men used the Italian city of Genoa (the home of so-called “jeane cotton”) to name the pants “blue jeans.”[7,8]

8. A total of 44 U.S. states have state lotteries. Only six states don’t have one. Nevada is one of those six. The other five include Alaska, Hawaii, Utah, Mississippi, and Alabama.[9]

9. A fact about Virginia City: Samuel Clemens, later known as Mark Twain, began his journalism career in the town, working as a writer for the Virginia City Territorial Enterprise.[10]

10. A Civil War officer killed during the Battle of South Mountain is little known except for the fact that part of his name, Major General Jesse Lee Reno, was given to a city in northern Nevada. Reno, Nevada; Reno County, Kansas; El Reno, Oklahoma; Reno, Pennsylvania; Fort Reno (Oklahoma); and Fort Reno Park in Washington, D.C. were named after him.[26]

Nevada on the map

11. Did you know that on a clear moonless night in Great Basin National Park, the Milky Way, man-made satellites, meteors and thousands of other stars can be seen with the naked eye?[36]

12. Nevada was the first state to ratify the 15th amendment, on March 1, 1869. The amendment gave the African American men the right to vote. One day after it was ratified, Thomas Mundy Peterson of Perth Amboy, New Jersey, became the first black person to vote under the authority of the 15th Amendment.[32,33]

13. The richest known deposit of silver in the United States was discovered on Mt. Davidson in the Virginia Range, in western Nevada.[6]

14. Used as a flight testing facility, Area 51, is a top-secret U.S. Airforce Military installation located at Groom Lake in southern Nevada. In the past, this area has been linked to various speculations including UFO sightings. Another conspiracy argued by Bill Kaysing suggests that NASA astronauts never made it to space and that all the footage of Neil Armstrong and Buzz Aldrin walking on the lunar surface was filmed at Area 51.[34,35]

15. The Great Basin National Park in Nevada is notable for its groves of ancient bristlecone pines, the oldest known nonclonal organisms. One of the species of this pine tree is more than 5,000 years old, making it the oldest known individual of any species.[41]

16. U.S. Route 50 (US 50) cuts directly across the center of the state of Nevada, and includes the section, which was famously nicknamed “The Loneliest Road in America” by the now-defunct Life Magazine back in 1986. The highway’s 408 miles traverses desert, mountain valleys and otherwise uninhabited areas known for their high boredom factor among long-haul drivers. The total length of the route is 3,000 miles (4,800 km) linking Ocean City, Maryland on the Atlantic Ocean to West Sacramento, California, on the Pacific Ocean.[12]

17. Life Magazine meant the term “The Loneliest Road in America” as something of a criticism, but state officials decided to use the term in advertising, and the ploy worked. Not only did the nick-name seem to intrigue the public, it actually boosted tourism among curious drivers who wanted to see what the desolate stretch of road was like.[15]

18. The biggest deceased polar bear on earth is encased in glass near the coffee shop of an Elko, Nevada, hotel and casino. King is ten-foot-four and weighs in at around 2,200 pounds in his bare feet.[15]

19. The bear ended up on display in Elko after a contest to locate the largest Arctic polar bear. King was also part of a famous Hunter Thompson story that was part of a Rolling Stone Magazine cover story in 1992.[15]

20. As far as agricultural crops go, Nevada’s most profitable product is wheat, which brings in a whopping $9.3 million in profit each year.[28]

21. At the bottom of Lake Mead is the town of St. Thomas. No one currently resides there.[16]

22. Always known as the Silver State, Nevada’s own gold rush began in 1961 when the Newmont Mining Company announced the discovery of a vast area of gold ore in the Gold Canyon region of the state. Humboldt County is the modern-day location for most of the gold-mining activity on the part of amateur miners who come to Nevada seeking their fortunes. Other, less adventuresome fortune-seekers head to the gambling tables of Las Vegas.[17]

23. Three of the world’s top ten producing gold mines are in the US and all of them are in Nevada: Carlin, Cortez, and Goldstrike.[42]

25. Nevada is now a major gold-producing region, second only to South Africa. In 2015 alone, the state produced more than $6 billion worth of gold or about 165 tons of the sparkly stuff. That amount accounted for nearly 80 percent of ALL gold mined in the U.S. that year.[17]

26. Compared to the California Gold Rush of 1848, the modern Nevada Gold Rush is by far the larger of the two, producing more gold over a longer period of time. California’s rush only lasted for seven years. Nevada’s has been going on since 1961.[17]

28. The lake’s Rubicon Trail Lighthouse is still one of the world’s only such structures located at high elevation. The lighthouse at Rubicon Point has the highest elevation (more than 6,000 feet) of any American lighthouse.[19]

29. Hikers love Lake Tahoe’s rim trail because of its natural beauty and challenging paths. In all, the trail is broken up into eight giant segments that stretch 170 miles in combined length.[20]

30. Known for having some of the most beautiful sunsets on earth, Lake Tahoe has been around for more than two million years, according to geologists. That comes out to 730 million gorgeous sunsets.[18]

31. Tap water in the Lake Tahoe area is known for its good taste and purity. The clear tap water recently was named “Best Drinking Water in America.”[20]

33. Access to BREN (Bare Reactor Experiment Nevada) has been shut off since 2006, but the 1,527-foot steel mast was part of nuclear testing events for many years. It’s in restricted air space and is owned jointly by a company called National Security Technologies and the Dept. of Energy. No official word was ever given as to the reason for the site’s closure.[21]

34. The Lunar Crater landmark site in Nye County features a 400-acre crater that resulted from a long-ago volcanic explosion, so the theory goes. The odd place was designated a national natural landmark in 1973. Before that, it was a training location for NASA astronauts who were headed to the moon.[22]

35. One of the largest cultural events in the U.S., the Burning Man festival (the symbolic ritual burning of a large wooden effigy), takes place each year in the Black Rock Desert, nearly 100 miles north of Reno. The festival draws upwards of 67,000 attendees and was first held in 1986.[29]

37. The Colorado River was diverted via a tunnel system in order to prepare the area for construction of the Hoover Dam. Four giant tunnels were chiseled out of the canyon’s walls and the river was entirely dug up before any of the actual dam-building work could begin.

38. When work on the Hoover Dam began, the U.S. President was Herbert Hoover, and it was going to be named after him. When he lost the 1932 election to Franklin Roosevelt, project planners changed the name to “Boulder Dam.” After FDR’s death, the name was changed back to Hoover Dam in honor of the former chief executive.[38]

39. The amount of concrete in Hoover Dam is shockingly great. An entire two-lane highway could be built with it, running all the way from San Francisco, California, to New York City.

40. Besides being a national historic landmark since 1985, the Hoover Dam provides massive amounts of electrical power to three states: Nevada, California, and Arizona.

41. Containing an incredible 2.5 million tons of concrete, Hoover Dam took about five years to complete and went into operation at the height of the Great Depression, on March 1, 1936.[39]

43. The Pershing County, Nevada Courthouse is one of only two perfectly round courthouses in the U.S (the other is Bucks County Courthouse in Pennsylvania).[23]

44. Except for fundraisers and church raffles for charity, lotteries are illegal in the state of Nevada, according to the infamous law known as “four-twenty-four,” which indicates the state legal code, Article IV, Section 24.

46. The atrium of the Luxor Hotel in Las Vegas is one of the largest enclosed, open spaces in the world, measuring approximately 29 million cubic feet.