Pennsylvania is the 5th most populous, the 33rd most extensive, and the 9th most populated of the 50 states of the United States. It is located in the northeastern and Mid-Atlantic regions of the United States. Pennsylvania attained statehood on December 12, 1787, becoming the 2nd state to join the union. Its six bordering states are New York, Ohio, West Virginia, Delaware, Maryland, and New Jersey. Pennsylvania (nicknamed: the Keystone State) has 67 counties. The state’s capital is Harrisburg. The postal abbreviation for Pennsylvania is PA. With these facts about Pennsylvania, let us learn more about its history, economy, geography, people and more.

3. Did you know that of the original thirteen colonies, Pennsylvania is the only that does not border the Atlantic Ocean? Along with New Jersey, New York, Delaware and Maryland, Pennsylvania is classified as a Middle Atlantic state.

Pennsylvania on the map

4. In October 1682, the younger William brought 360 settlers who believed in religious freedom and a fair government to form this 12th of the 13 English colonies.

6. Pennsylvania is the second state, after Delaware, to ratify the Constitution of the United States of America. At the time it was the most ethnically and religiously diverse of the thirteen States.[2]

8. During the American Revolution, the Liberty Bell was moved from Philadelphia to Allentown. It was returned after the British evacuated Philadelphia. On the bell Pennsylvania is spelled with only one “n”. When the bell was created this was an acceptable form of spelling Pennsylvania.

9. On September 19, 1982, the first internet emoticon, the humble smiley, was invented at Carnegie Mellon University in Pittsburgh by Professor Dr. Scott Fahlman. Today, according to some estimate, more than 6 billion emoticons are sent every day.[26]

10. Benjamin Franklin and Bill Cosby are the famous Pennsylvanians.[2]

11. The Pennsylvania Packet and daily Advertiser was the nation’s first daily newspaper. It was published first on September 21, 1784.

12. Pennsylvania is almost rectangular in shape.[3]

13. The first piano in America was built by Johann Behrent in Philadelphia in 1775.

14. Philadelphia, Pennsylvania, has the highest density of haunted houses and hence it is also considered one of the most haunted cities in the U.S.

The state flag of Pennsylvania (5 facts about the flag) 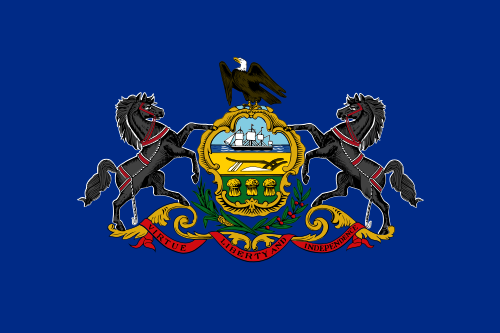 15. Before the establishment of Washington D.C. as the permanent capital of the United States of America; Philadelphia, Pennsylvania was the nation’s capital between 1790 and 1800s.[2]

17. The first computer in the world–The Electronic Numerical Integrator and Computer–was invented at the University of Pennsylvania in 1946.[4]

18. The first Zoo in the United States of America was opened in Philadelphia, Pennsylvania on July 1, 1874.[4]

19. And the first public library was founded by Benjamin Franklin in 1731 in Philadelphia.[4]

20. Philadelphia is also the place where the first American Flag was sewn in 1777 by Betsy Ross.[4]

21. In 1883, the City Hotel in Pennsylvania was the first building to be lit with Thomas Edison’s three-wire system.[6]

22. Pennsylvania is also home to one of the largest manufacturer of chocolates in the world – “Hershey”. The company is headquartered in Hershey, Pennsylvania. The company’s products are sold in over 60 countries.[7]

23. The license plates on automobiles registered in Pennsylvania also have the state’s official website’s URL (www.pa.gov) on it. It is the first state of the 50 states to do so.[16]

26. In Pennsylvania, Beef is the third most produced food by value.[10] 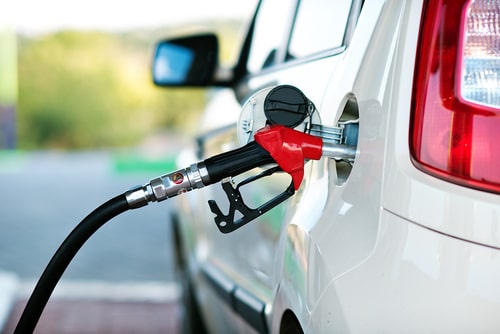 28. The state also has the oldest gas station in America. It is situated in Altoona and is operational since 1909.[8]

30. The Carnegie Museum of Natural History in Pittsburgh, PA, is home to the first complete Tyrannosaurus Rex skeleton ever found.[12]

31. Did you know that Pittsburg is famous for manufacturing steel and its NFL team is the Pittsburg Steelers?

32. Pittsburg, the second most populous city in PA, has more bridges than Venice. It is also known as “the City of Bridges.” The city has more than 440 bridges.

33. Pittsburgh is named after William Pitt.

34. Located in Pittsburg, PA, Bicycle Heaven is the largest transportation museum in the world dedicated to bicycles. The founder of the museum Craig Morrow, is however, not an avid rider but an avid collector. It is an interesting fact that some bikes in his collection are worth more than $50,000. The museum is open to the public seven days a week, at no charge.

35. Andrew Carnegie, the steel magnate, co-founded his first steel company near Pittsburgh, Pennsylvania. He sold his company for $480 million and later gave away more than $350 million in philanthropy.[30]

36. Philadelphia Stock Exchange, now owned by Nasdaq Inc. is the oldest stock exchange in the United States. The exchange was originally named as the Board of Brokers of Philadelphia.

37. Philadelphia, the state’s largest city is known as “the city of Brotherly Love” because of the religious tolerance of William Penn, the state’s founder.[13]

38. Pennsylvania was nicknamed “The Keystone State” because of its geographical location among the thirteen original colonies. A keystone is a stone on which the associated stones depend for support. Because of the state’s central location along the arch of the original thirteen colonies, the state is nicknamed the keystone state.[13]

39. Did you know that Pennsylvania produces more mushroom than any other state in the U.S.? According to the U.S. Department of Agriculture National Agriculture Statistics Service (NASS), nearly two-thirds of the white button mushrooms consumed in the United States comes from Pennsylvania.[27]

41. The president’s house, home to Presidents George Washington and John Adams, in the city of Philadelphia, served as America’s first executive mansion.