Idaho is the 38th most populous and the 14th most extensive of the 50 states of the United States. It lies in the northwestern region of the United States. The state attained statehood on July 3, 1890, becoming the 43rd state to join the union. Its six bordering states are Utah, Washington, Wyoming, Montana, Nevada, and Oregon. To the north, it shares a small portion of the Canada–United States border with the province of British Columbia. See the complete list of the 50 states and their borders here. Idaho (nicknamed: the Gem State) has 44 counties. The state’s capital is Boise. The postal abbreviation for Idaho is ID. With these facts about Idaho, let us learn more about its history, geography, people, economy and more.

1. The state’s name derived from a Native American word that means “the land of many waters.” The pronunciation is similar to the state’s name.

2. Idaho is sometimes referred to as the Gem State. One can find nearly 72 types of precious stones in the state.

3. The state grows nearly one-third of America’s potatoes. It is likely that the people living outside the state eat more of these starchy vegetables than the people in Idaho.

4. Idaho is home to the largest potato in the world.

5. A mayor seemed to have a strange adoration for his small town in Idaho. He declared that Wallace, with a population of 800 people, was the Center of the Universe. A manhole cover was made to mark this declaration and the place he said was the center.

6. Idaho produces other crops besides potatoes. The state is actually known as the Lentil Capital of the World. It is also known for having one of the largest hops farms in the United States.

7. There are two time zones in Idaho, the Mountain Time Zone and the Pacific Time Zone.

8. The United States Forest Service holds about 38% of Idaho’s land, the highest proportion of any state.

9. This state is known for having a canyon with an interesting name. The canyon is called Hells Canyon, and it’s 7,900 feet deep. Keep in mind that this is deeper than the Grand Canyon. High above the canyon is Heaven’s Gate Lookout where you can gaze at the entire state of Idaho plus the Bitterroot Mountains in Montana.

10. Idaho is the fastest growing state (by population) in the United States.

11. There are only a few places in the world where a bounty of star garnets can be found. One is in India and the other happens to be in Idaho. The Emerald Creek Garnet Area provides opportunities for harvesting star garnets. A permit is issued for visitors who wish to dig.

12. Idaho imports most of the energy it consumes.

13. The town of Atomic City was once home to a real live nuclear reactor.

15. Many states are working toward being more eco-friendly, but it seems that Idaho is moving quickly. The state’s Capital Building is the only state capital that is kept warm using a renewable source of energy. It is called geothermal water, which means the hot water that sits 3,000 feet underground is used to produce heat.

16. Women should be pretty proud of Idaho as it is the only state seal in the United States that was designed by a woman. The woman was Emma Edwards Green, and her design was chosen in 1891.

17. Idaho may be known for its crops or gems, but one thing that horror lovers like about the state are the ghost towns. Silver City and the Burke are some of the most known ghost towns, but there are many others. 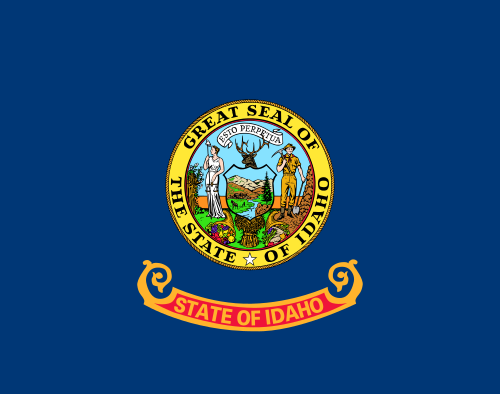 18. It might sound a little strange, but it is against the law for a man to give his beloved a box of sweets that weighs more than 50 pounds.

19. People really love to smile in Pocatello, Idaho. This obsession with smiles went so far that it became a law. Yes, it is illegal not to smile in public in this little region of the state.

20. It is illegal for a person to fish while they are riding the back of a camel. Take that camel-riding fisherman.

21. A person cannot sweep dirt from his or her house into the street. This is a law in Eagle, Idaho where cleanliness is definitely valued by the people in the city.

22. Idaho’s State Penitentiary is known as a haunted location. Talk about a double-whammy for those who might commit a crime.

23. Heaven’s Gate Lookout, in Idaho, is a location where you can see Washington, Montana, and even Oregon.

24. This state is home to Atomic City, which was booming when the National Reactor Testing Station was active in the 70s. It is a desolate area with around 29 people now.

25. There is a ski resort in McCall, Idaho that is home to the Brundage Bra Tree. The name is known throughout Idaho because it is where many women throw their bras as they ride a chairlift.

26. One 1800’s tale says there is a strange creature in Bear Lake, Idaho. It is known as the Bear Lake Monster, and this story has scared some kids in the state.

27. This region is home to the highest navigable river in the world. The river is called St. Joe River, and it flows from an elevation of nearly 7,000 feet. Most of its trailheads follow through moderate slopes that are easy to trek. Commonly known as shadowy St. Joe, the river is one of the finest spots for camping, hiking, fishing, and whitewater rafting in the region. The Scenic Byway travels along the river. It is named after the towering cottonwoods that beautify the oceanfront in addition to the idyllic mountainous landscape. Moose, bear, elk, deer, can be spotted on the river’s edge.

28. Idaho has more whitewater river miles than any other state.

29. This state offers the longest gondola ride in the world, so strap in and enjoy nature from above. The gondola is in the Silver Mountain Resort in Kellogg.

30. Idaho actually holds a strange little Guinness World Record for a maze. Yes, the state is known for the longest straw bale maze, which is in Rupert.

31. Someone paid $600,000 for a bull from Idaho. This was the most expensive bull ever sold. The cost was high because the Hereford bull weighed 1,410, and its lineage was impeccable.

32. The Lake Coeur d’Alene boardwalk is 3,300 feet long and is known as the longest boardwalk in the world. This is definitely for all those who love to walk by the beach.

33. Dog lovers should be interested in Idaho because it is home to the only dog-shaped B&B in the world. For those who want to visit the dog lover’s paradise, it is in Cottonwood, ID.

34. There is a small town in Idaho that has the longest main street in the United States. It is located in the City of Island Park.

35. The Coeur d’Alene Resort is home to the only man-made 14th hole island. It definitely gives golfers a new experience.

36. A gargantuan tree can be found at The Elk River. It is called the Idaho Champion Western Red Cedar Tree. It has an 18-feet diameter and it’s over 170 feet tall.

37. Idaho City can thank gold for its success. Yes, the city’s economy boomed because of gold mining back in the 1860s.

38. Idaho definitely stepped up to the plate when it came to structured sand dunes. Bruneau Dunes State Park is home to the country’s tallest structure that stands 470 feet high.

The dune is known as Big Dune. Bruneau Dunes is located in the Bruneau Desert, which covers parts of southern Idaho and northeastern Nevada. The park is named for the Bruneau River (a 153-mile-long tributary of the Snake River), which flows through the area.

39. Idaho is home to the Niagara of the West. Yes, those who want to experience something like Niagara Falls could check out Shoshone Falls with its 212-foot drop.

40. Those interested in birds of prey will be happy to know that Idaho has an awesome wildlife preserve, which is known for its dense population of falcons, eagles, and hawks.

41. If you are interested in old churches, you may want to visit the Rathdrum. This city holds the state’s oldest brick church called the Saint Stanislaus Church.

42. North America has a lot of ski resorts, but it seems that Idaho beat other states to the punch. The first ski destination in the United States is Idaho’s State Valley.

43. The state’s fruit is the Huckleberry, which makes sense because Huckleberry tea is good for starch digestion. Potatoes, the most popular vegetable in the state, are full of starch.

44. The state’s motto is “Esto Perpetua,” which means “this is forever.”

45. 13 is a very special number for this state. It is special because it is the 13th largest state (in terms of land area) in America.

46. Idaho might not like the idea of private land. This is evident because a whopping 63 percent of the state is considered public land.

47. Idaho may be known for potatoes, but it should be known for its trout, too. It is estimated that 85 percent of all the commercial trout sold in America comes from Hagerman Valley.

48. Evil Knievel tried to jump over the Twin Falls in 1974. He failed, but those interested in seeing the failed jump can check out the Twin Falls.

49. The word “potato” was first used in the state’s license plate back in 1928, and the state has not looked back since.

50. One of the most celebrated winter celebrations called the Winter Carnival in McCall began in 1924. It actually started because the locals were bored.

52. This region is home to the Treefort Music Fest, which is held in Boise. It is perhaps one of the most successful modern country music festivals in America.